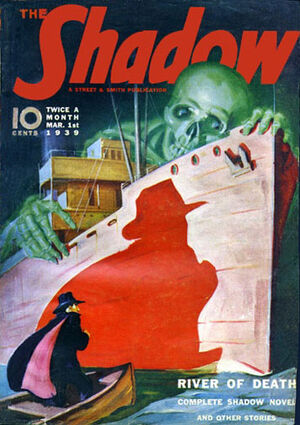 Two harbor cops dead! A gang of river pirates wiped out by another gang - who promptly disappear into the depths of the Hudson like a bunch of deep-sea divers! Men found floating in the river with a queer mark on their foreheads! Another discovered drowned in the Central Park Lake, in the middle of Manhattan! And this business about Davy Jones! Who is he? What is he? My stoolies tell me that for weeks the underworld has been buzzing with quiet rumors that a supercriminal has taken over the entire waterfront of New York.

Appearing in "River of Death"

Synopsis for "River of Death"

Retrieved from "https://thelivingshadow.fandom.com/wiki/Shadow_Magazine_Vol_1_169?oldid=11338"
Community content is available under CC-BY-SA unless otherwise noted.