The Shadow Wiki
Register
Don't have an account?
Sign In
Advertisement
in: Publications, 1938, May, Golden-Age,
and 17 more 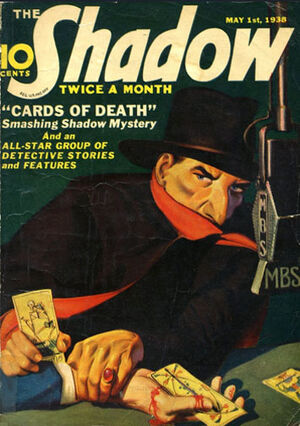 By plucking a tarot card, "La Morte." "Death," the one infallible card. There is another, that is even greater than the card of death. Receive it, not from Legrec, but from The Shadow! "Il Matto!" "The fool who gains what he deserves" -- from The Shadow!

Appearing in "Cards of Death"

Synopsis for "Cards of Death"

One by one, these little paste-boards turn up, dealt by a fiendish murderer. Will The Shadow be able to hold the winning hand in the Cards of Death?