The Shadow Wiki
Register
Don't have an account?
Sign In
Advertisement
in: Publications, 1937, October, Golden-Age,
and 19 more 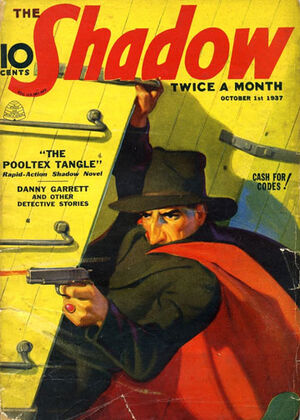 You aren't going to die, Doctor Leach - not yet! That slug through the upper wall of your chest missed the lung cavity. When you recover from that wound, you're going to die sitting up! In the same place Pool will die. The electric chair! And I hope they burn you last so you'll have time to think it over. Pool killed Milton. But you - you're the cold-blooded rat that murdered my nephew!

Appearing in "The Pooltex Tangle"

Synopsis for "The Pooltex Tangle"

An amazing tale of crime that runs from railroads to ships, from factory to penthouse, from small town to the capitals of the world!