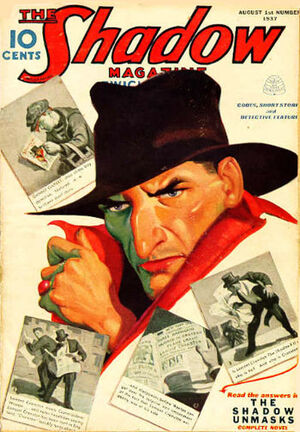 You remember Kent Allard, the aviator, who was lost a dozen years ago? On that flight to South America? They've located Allard himself! He landed in the Guatemalan jungle, and became the white god of a tribe of Xinca Indians. A Xinca messenger has just shown up in Puerto Barrios, on the Caribbean, with word that Allard is on his way back to civilization. The Classic wants me to go to Guatemala and meet him.

Appearing in "The Shadow Unmasks"

Synopsis for "The Shadow Unmasks"

For the first time in his long career as a crime fighter extraordinary, The Shadow thrusts aside his veil of mystery! Not under one of his many aliases but in his true identity, The Shadow reveals himself! Here, in his latest battle against the underworld, is exposed the unfathomable past of being known to all the world as The Shadow!

While trailing some jewel thieves, The Shadow drops his Lamont Cranston alter ego when newspaper headlines claim that the real Cranston has been injured in an airplane accident. The Shadow decides to reveal his true self to his friend, Slade Farrow, as the recently found aviator, Kent Allard.

Retrieved from "https://thelivingshadow.fandom.com/wiki/Shadow_Magazine_Vol_1_131?oldid=14925"
Community content is available under CC-BY-SA unless otherwise noted.