The Shadow Wiki
Register
Don't have an account?
Sign In
Advertisement
in: Publications, 1937, February, Golden-Age,
and 17 more 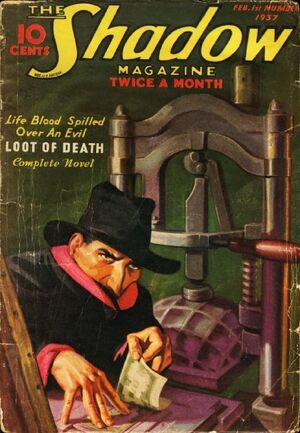 A murderer is with us. He has gained his spoils. He has disposed of all who aided his purpose. He has closed every trail. No questioning can make him betray his moves of crime. That murderer belongs to the law. Therefore, the law shall have him. Once facts are told, the truth will be apparent.

Appearing in "Loot of Death"

Synopsis for "Loot of Death"