The Shadow Wiki
Register
Don't have an account?
Sign In
Advertisement
in: Publications, 1937, January, Golden-Age,
and 18 more 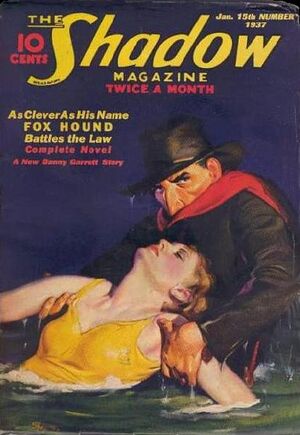 To me he always has been - The Shadow. But I can tell you one thing -- He's the greatest detective that you or I will ever see in this world! A genius who has dedicated his life to the cause of justice!

Foxhound laid his plans of loot, not heeding to any grim warning. He would strike with a series of bloody murders, and escape with the speed of his namesake, but when The Shadow intervened, a grim battle of hare and hounds began, giving the mastercrook a bloody chase that ends only at the kill!