The Shadow Wiki
Register
Don't have an account?
Sign In
Advertisement
in: Publications, 1936, October, Golden-Age,
and 10 more 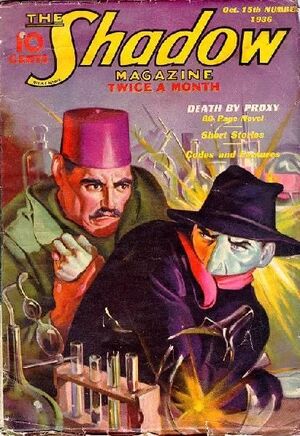 Appearing in "Death by Proxy"

Synopsis for "Death by Proxy"

It marked the end of another life-risking battle against crime, and at the same time it presaged greater difficulties ahead. The Shadow, who escaped death a million times, was to face a new kind of death, and a new kind of crime, in Death by Proxy, matching his wits against the wits of a master villain, and stacking his two guns against the arms of dozens of hirelings. A strange menace hung over an ancient family home; death struck with uncanny regularity. Into this scene of fear and danger The Shadow must enter; here he must fight anew that justice would not be misled; that criminals get their deserved punishment - death, real death, not Death by Proxy.