The Shadow Wiki
Register
Don't have an account?
Sign In
Advertisement
in: Publications, 1936, October, Golden-Age,
and 17 more 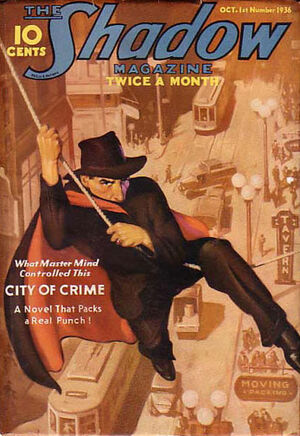 Appearing in "City of Crime"

Synopsis for "City of Crime"

The Shadow doesn't go after just one man, or one family, but a whole city -- a city of crime -- in which the roots of gangdom has grown so strong that they hold almost every citizen in their clutch. From the least important citizen to the most prominent civic leader, the guilty finger points its way. Only some tremendous outside force could clear this evil; only someone with the power of The Shadow could hope to battle such outstanding odds.