The Shadow Wiki
Register
Don't have an account?
Sign In
Advertisement
in: Publications, 1932, June, Golden-Age,
and 18 more 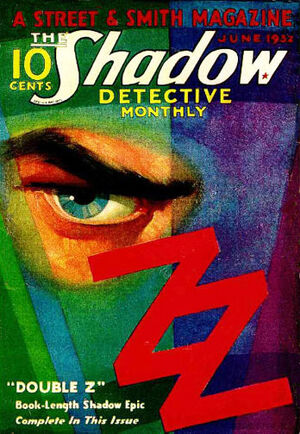 For some time now The Shadow has been silent. Even Harry shows concern in his absence. Meanwhile a ruthless killer has been plotting in anonymity, known only as Double Z.

Judge Harvey Tolland has been targeted by this unseen force. For several months, Tolland has been in hiding, taking on a new identity and appearance. He has figured out the identity of Double Z and fears for his life. Joel Caulkins, reporter for The Evening Classic has caught wise to the judge and approaches him in his hideout looking to break the story. When Tolland informs him of Double Z's true identity. They are killed by the villain and one of his goons. Now The shadow must investigate.

Clyde Burke with his connections to the newspaper company uncovers details of the reporters death. For Months Double Z has made threats in the form of signed letters, claiming murders and destruction will happen at specific times. He signs his letters With two Zs, one on top of the other.

Following the murder of wealthy banker Philip Farmington, The Shadow as Lamont Cranston looks for clues relating to the crime in the Cobalt Club. Not only was Farmington a member of the club but several other members fear their safety in the wake of Double Zs crime spree.

Barnaby Hotchkiss, a lumber magnate, Blaine Glover, a steamship man, Stephen Baum, a chain store owner and Matthew Wade, a world traveler all discuss their relation to Farmington and possible attack from Double Z. Present in the club is investment broker, Rutledge Mann. The Shadow makes conversation with him and learns he has gone broke after the stock market crash of 1929. Later in his apartment Mann comes close to suicide when The Shadow intervenes. He offers him work as a contact man between him and his other agents. Mann accepts and becomes a new agent of The Shadow. Mann takes the place of Claude Fellows, the previous contact man who died in Chicago in 1931 during a mob hit. Like Harry, he is saved from suicide by The Shadow to become one of his agents.

The Shadow, disguised as Detective "Terry Blake" convinces Joe Cardona to take him to the scene of the Farmington murder. Cardona who was present at the time of the murder reveals that Farmington was smoking a cigar when he died. The Shadow figures out a specific Chinese poison was used on the cigar. This leads him to Loy Rook a big figure in the underworld. Most of the story revolves around warring mobsters that either work with double Z or oppose him.

Field agents Cliff Marsland and Harry Vincent infiltrate factions of the mob world. Cilff involves himself with Hitman Sneaks Rubin. Harry involves himself with Loy Rook. After a power struggle leaving several mobsters dead, Harry and Cliff are in Rooks hideout where they are outed and captured. Double Z and Rook intend on catching The Shodow. Before Harry and Cliff are assassinated, The Shadow wipes out Rook and the remaining mobsters on Double Z's hit squad. Matthew Wade informs Cardona that he received a letter from Double Z claiming he would be murdered. Wade proposes he should fake his death to thwart Double Z and his friends Hotchkiss and Glover would watch his estate.

A man named Zachary Shellmann is fingered as the identity of Double Z. His adopted son Luke Froy was involved with Loy Rook. During a police raid Shellman is shot by Cardona and Froy shoots himself. The Shadow once again disguised as Detective "Terry Blake" learns new details involving Double Zs crimes from a dying Froy.

Cardona who faced possible termination if he couldn't solve the case was content to conclude Shellman was double Z. His first name starts with Z and several matching notes were found in his home.

In the final chapter The Shadow arrives at Wades residence he confronts Matthew and tells him he knows he has been acting as Double Z. Wade had been addicted to crime. He killed Tolland to silence him. He killed and manipulated rich men and mobsters to attain a position of power while Shellmann would send out his letters. Now with everyone gone he would kill Hotchkiss and Glover with a bomb in his home. Wade demands proof. The Shadow reveals that he cracked the code to Double Z's calling card. The ZZ symbol when turned sideways reveals the letters aren't two Zs but an M and W on top of each other. Wade knowing he is caught attacks The Shadow. In the ensuing chaos Wade is shot through the heart. The Shadow leaves Wades body in the hidden chamber in his home never to be discovered. Wade who had faked his death would not be looked for and Cardona would get the credit of cracking the case and remain a top detective in the New York police department. Only The Shadow knows the truth.