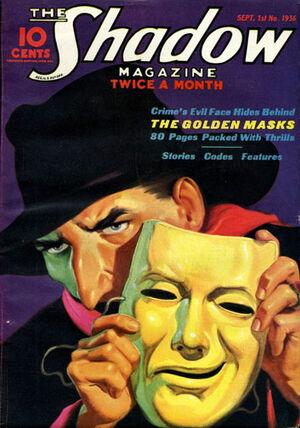 Get this, Markham, I told you The Shadow was on the move, when we heard about that find on Long Island. Well, they saw The Shadow up by that warehouse that's been raided. They grabbed a bunch of phonies with gold faces when they broke in there. Now The Shadow's been seen here. They think he's gone into this house. If he has, he's got some more of the tribe to handle. We're going in there and give him a hand.

Appearing in "The Golden Masks"

Synopsis for "The Golden Masks"

Retrieved from "https://thelivingshadow.fandom.com/wiki/Shadow_Magazine_Vol_1_109?oldid=11171"
Community content is available under CC-BY-SA unless otherwise noted.