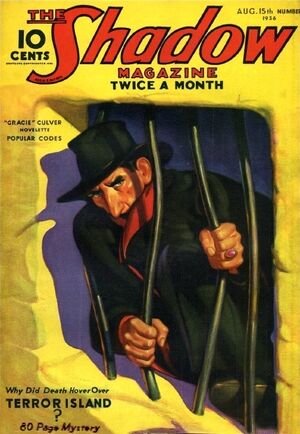 Mr. Farrow, I have come here on a matter which concerns The Shadow. Both of us have served him. Posing as an investment broker, I work for The Shadow. Your part has been a different one. As a criminologist, you have knowledge of the underworld. In times of emergency, you have supplied able workers to The Shadow. Men who were once crooks, but who have gone straight. He requires them at present.

Retrieved from "https://thelivingshadow.fandom.com/wiki/Shadow_Magazine_Vol_1_108?oldid=11167"
Community content is available under CC-BY-SA unless otherwise noted.