The Shadow Wiki
Register
Don't have an account?
Sign In
Advertisement
in: Publications, 1936, June, Golden-Age,
and 19 more 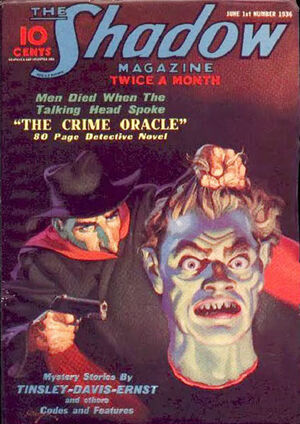 Appearing in "The Crime Oracle"

Synopsis for "The Crime Oracle"

Out of thin air came this bodiless specter -- a gruesome, learning head that talked! Murder was done at this monster's bidding! But from the mind of The Shadow came knowledge that counterbalanced the twisted brain that was The Head!