The Shadow Wiki
Register
Don't have an account?
Sign In
Advertisement
in: Publications S, The Shadow Titles, Street & Smith Titles,
and 6 more 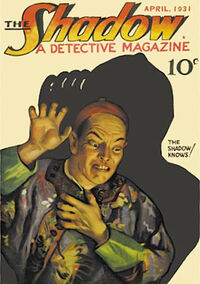 The Shadow was a crime-mystery magazine which featured the pulp hero in his first ongoing publication, and as such became highly influential to other pulps and comic books. It launched as a monthly in 1931. The following year it became a twice-monthly, which lasted for ten years. In 1943 it became a monthly again and in 1947, the schedule dropped to bimonthly. By 1948 it was a quarterly and the magazine finally expired eighteen years later in the summer of 1949.

In total, there were 325 issues, each containing a lead novel featuring Kent Allard as "The Shadow." Most of the stories were written by Walter B. Gibson (under the byline Maxwell Grant) although one was written by Lester Dent, and a small number were by Bruce Elliott and Theodore Tinsley (all under the Grant byline). There were also three volumes entitled The Shadow Annual, which reprinted earlier stories.