The Shadow Wiki
Register
Don't have an account?
Sign In
Advertisement
in: Publications, 1948, April, Golden-Age,
and 9 more

Second Shadow story: The Shadow and the Treasure Chest of Death.

"The Curse of the Cat" 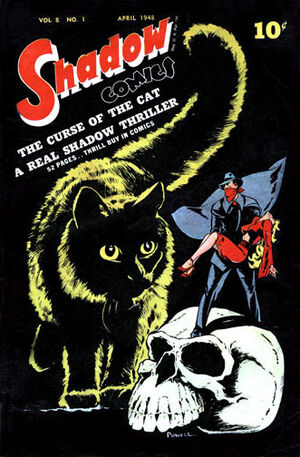 Appearing in "The Curse of the Cat"

Synopsis for "The Curse of the Cat"

Michael Strong's daughter returns home from an African safari where her mother was horribly killed by a giant jungle cat. The tragedy causes the young woman to become neurotic, believing she is "cat like." Instead of committing her to a hospital, the father would rather protect her by killing off anyone who snoops around their estate. The Shadow and Margo Lane stumble onto the case when they go search for a missing pet store owner.