The Shadow Wiki
Register
Don't have an account?
Sign In
Advertisement
in: Publications, 1946, June, Golden-Age,
and 10 more 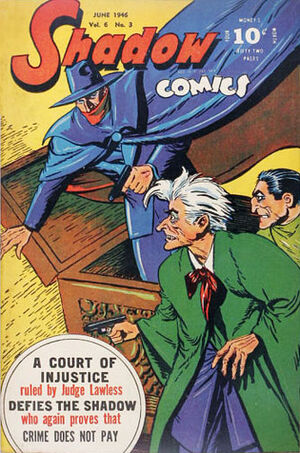 Buried deep somewhere in the city, there is a court of injustice presided over by a super-criminal who calls himself Judge Lawless. He continues to make a mockery of all things legal, even trying to defy The Shadow by sending a note to Police Commissioner Ralph Weston explaining his next robbery at a rich estate. Lamont Cranston and Margo Lane are aware of the note, but Margo decides to go investigate alone. She disguises herself as a maid, and is hired by the estate which is about to be robbed (or so the note stated). Later, Cranston changes into The Shadow and goes down the chimney of the mansion.

Meanwhile, a bunch of Judge Lawless' henchmen smash down the front door to rob the place. They steal a treasure chest and kidnap Margo Lane. She is then taken to "the court of injustice" where she is sentenced for interfering with their crime. As the thugs open the treasure chest, The Shadow hops out and confronts the Judge and jury. The cops rush in and take over as The Shadow and Margo sneak out.


Appearing in "Crime at Thunder Lake"

Synopsis for "Crime at Thunder Lake"