The Shadow Wiki
Register
Don't have an account?
Sign In
Advertisement
in: Publications, 1943, May, Golden-Age,
and 15 more 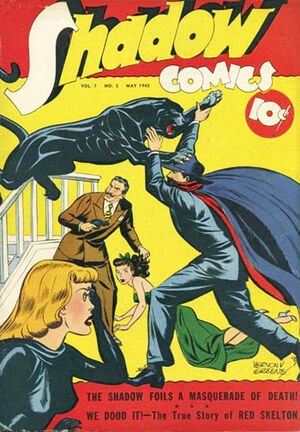 Appearing in "The Black Ray"

Synopsis for "The Black Ray"

Valda and Skeet are at costume shop owned by the master plotter Althor. Valda puts on a cat costume to pass undetected and explores the secret passages. Meanwhile, Skeet is captured by Althor's henchmen. Margo and Lamont arrive at the shop and find Valda's purse. The Shadow believes Valda is in danger and searches for her, leaving Margo in a jealous mood. Margo finds a white sheet and disguises herself as a ghost, however, she is soon captured by Althor's thugs.

Still in her cat costume, Valda locates Althor and pretends to be on his side in order to learn more of his evil plans. Althor shows her the trapped prisoners who are inside a cell. Somehow, Skeet squeezes over the bars and escapes. Suddenly, The Shadow appears and confronts Althor and a killer black panther. During the conflict, Valda tries to help the crime fighter, but becomes caught in a revolving door which snags her costume off. Margo, no longer a prisoner, sees Valda and gives her an old 1890s dress to wear.

Outside, The Shadow and Skeet are in a car chase pursuing Althor and his henchman. The evil duo are about to throw a bomb, but it explodes in their car and kills them.

Back at the costume shop, Skeet notices Valda in the old-style dress, and likes what he sees. He invites her to the frat dance costumed ball and once again Margo is in a jealous mood.

While flying to Tokyo, The Shadow's plane is shot down, but strangely this seems to be the crime fighter's plan, as his fiery plane crashes, explodes and kills several Japanese soldiers.

Meanwhile, the evil Devil Kyoti has escaped from the Shinto Wizards and begins another mad drive of destruction across Tokyo. The Shadow heads to an airfield to gain another plane to pursue Devil Kyoti.