The Shadow Wiki
Register
Don't have an account?
Sign In
Advertisement
in: Publications, 1940, March, Golden-Age,
and 5 more 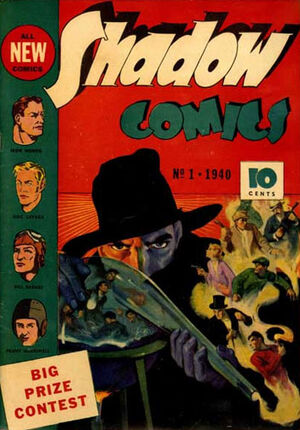 Appearing in "Introducing The Shadow"

Synopsis for "Introducing The Shadow"

The most popular character in America.

The Shadow is featured every month in The Shadow Magazine, he is heard every Sunday afternoon on a coast-to-coast radio network and is voted the most popular daytime show, Columbia Pictures have made a wonderful motion picture of his adventures and are now showing it at your neighborhood theater -- all this is proof that The Shadow is America's favorite character.

In his first issue, The Shadow is suspected of being a saboteur. He goes after the real culprits, clears his name and breaks up the evil spy ring.