The Shadow Wiki
Register
Don't have an account?
Sign In
Advertisement
in: Publications S, The Shadow Titles, Street & Smith Titles,
and 7 more 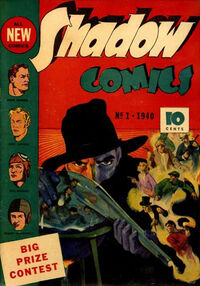 In 1940, The Shadow began to appear in newspaper comic strips, Walter B. Gibson adapted some of the novels, while Vernon Greene provided the art. However, the strip only lasted for two years.

Fortunately, Shadow Comics also started in 1940 and in 1941 it featured a compilation of some of the newspaper strips. The covers and stories were picked out by Gibson and Street & Smith editor, John Nanovic, with Gibson adapting his stories from Shadow Magazine. He continued to work on The Shadow comic scripts until 1947. The comic itself was published until August 1949, lasting a total of 101 issues.