The Shadow Wiki
Register
Don't have an account?
Sign In
Advertisement
in: Publications, 2012, September, Modern-Age,
and 11 more

"The Fire of Creation: Part Five" 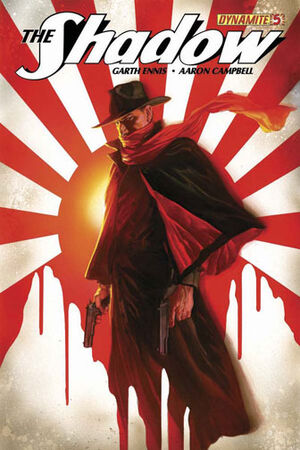 They taught me to recognize evil in the heart's of men by looking in my own. They made me into death itself.

Appearing in "The Fire of Creation: Part Five"

Synopsis for "The Fire of Creation: Part Five"

1938: Kondo's trap succeeds beyond his expectations, as a bloody massacre leaves our heroes alone in the wilderness without hope of rescue. Deep in the kingdom of Buffalo Wong the object of everyone's desire is revealed, and Margo Lane and Pat Finnegan begin to see just how far Lamont Cranston will go in pursuit of his goals. Meanwhile, The Shadow begins to lay plans for a cataclysmic showdown with his foes.