The Shadow Wiki
Register
Don't have an account?
Sign In
Advertisement
in: Publications, 2014, March, Modern-Age,
and 14 more 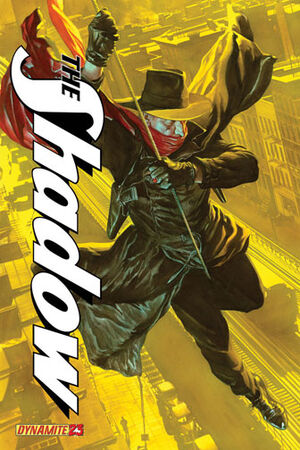 The man you knew as The Dark Eagle is no more, just as you are no longer the White Tiger. Instead we stand here an instrument of justice, and a man whose crimes call out for justice. So let justice be served...

The Shadow's search for who owned the second Girasol, which was on the severed finger of an old colleague, "The White Tiger," comes to an end.

It is revealed that The White Tiger once served for the Tsar's secret intelligence branch with Allard. However, when the Tsar fell, The White Tiger went to to the deepest jungle of Guatemala and stumbled upon a fire-stone embedded inside a statue's eye socket. After stealing it, he then came to America in order to regain wealth through murderous actions, but thugs took his opal ring by severing off his finger.

As The White Tiger is deep in thought and wandering around New York, he finally comes face-to face with his former ally, The Shadow. After a winded speech about vengeance and intent, The Shadow pulls out his two .45s and justice is served.