The Shadow Wiki
Register
Don't have an account?
Sign In
Advertisement
in: Publications, 1994, July, Modern-Age,
and 15 more 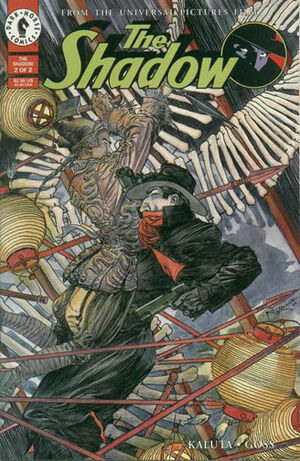 Appearing in "The Shadow"

Synopsis for "The Shadow"

This is a simplified adaptation of The Shadow (1994 Movie).

Shiwan Khan travels to America and kidnaps Margo Lane and her scientist father, Reinhardt Lane. He hopes to take over the world, staring with the destruction of New York, but first he hypnotizes Margo, arms her with a pistol and sends her after The Shadow.

Margo, instead, locates Lamont Cranston outside the ruins of the destroyed Hotel Monolith. She fires her gun, but misses. As she faints, she suddenly realizes Cranston is "The Shadow." She is taken inside Shrevvy's cab and when she awakes, Cranston explains to her Khan's mission of destruction.

Piecing information together, The Shadow learns that Khan has acquired an "implosion" device, and will detonate it somewhere in the city.

Meanwhile, high atop a building, Khan and Margo's kidnapped father, Reinhardt Lane, are preparing the device and setting a timer.

Back at the ruins of the Hotel Monolith, The Shadow begins to concentrate, centering his power, and turning it against his foe. Khan senses this, and sends his hatchet-men to confront the dark avenger. The assassins are easily fallen, however, the bomb begins it's countdown.

While the two foes continue to lock their minds and battle it out, Margo and her father scramble to defuse the bomb.

Assessing the situation, The Shadow informs the Lane's to stop shutting down the bomb, instead place it inside the silver coffin of Khan's, shut the lid and run from it.

When the implosive device detonates, Khan's mental power is weaken and he can no longer fight The Shadow's will. The city is saved.