The Shadow Wiki
Register
Don't have an account?
Sign In
Advertisement
in: Publications, 1987, March, Modern-Age,
and 20 more 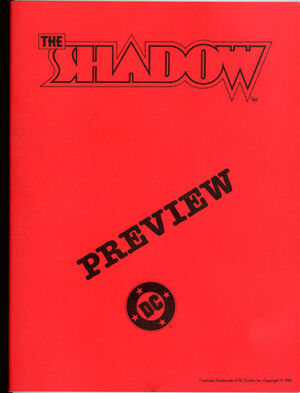 Preston Mayrock II, the cloned "son" of Lamont Cranston, stumbles to a hospital bloody, dying and whispering "the shadow." Word of this goes out to Inspector Joe Cardona. A few of The Shadow's agents also become aware of the situation and believe it is he who is being cared for in the hospital, however, The Shadow is alive and well. In fact, he's on a case when he hears of the unfolding events. In haste, he has his agents kidnap Mayrock Jr. and place him in a fake ambulance, as he does not want "two" Cranston's roaming around. Whisked away by plane, Jr. wakes up and confronts The Shadow by leaping on him which tosses them both out of the plane and plummeting down to earth.