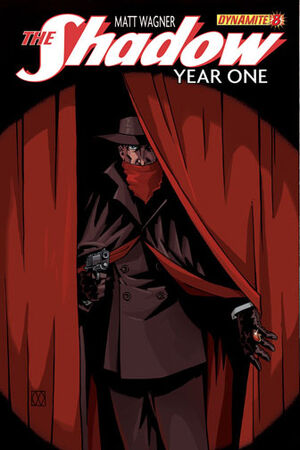 1929: In the aftermath of his sky-scraping battle with Big Gun Massaretti, Lamont Cranston hunts for the psychic super-villain who was puppet master to the belligerent mobster, the grotesque and mysterious Dr. Zorn. His pursuit takes him to all corners of the Big Apple, even as the NYPD are just beginning to hear reports of the dark-clad vigilante known only as The Shadow!

Retrieved from "https://thelivingshadow.fandom.com/wiki/Shadow:_Year_One_Vol_1_8?oldid=14387"
Community content is available under CC-BY-SA unless otherwise noted.