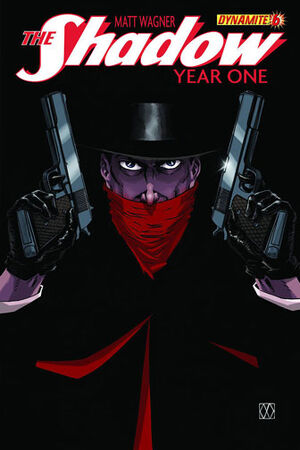 I am the specter of judgment and weapon of justice. I am... The Shadow!

1929: During a criminal interrogation with one of Bianchi's henchman, Police Inspector Cardona hears for the first about a mysterious, black clad vigilante whose merciless vendetta is accompanied by a spine-chilling laugh.

The Shadow becomes more frustrated by his continual inability to locate Big Gun Massaretti. Meanwhile, The Shadow's fledgling agent, Margo Lane, unwisely locates the mob boss on her own at a seedy nightclub.

Retrieved from "https://thelivingshadow.fandom.com/wiki/Shadow:_Year_One_Vol_1_6?oldid=14385"
Community content is available under CC-BY-SA unless otherwise noted.