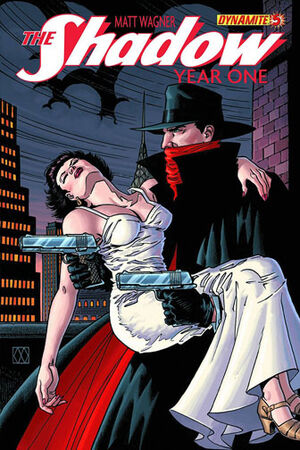 I had to see. I had to know. The creature I beheld was like something out of a dream. Black as the night itself. Undaunted by any threat. His laughter echoed with contempt for his enemies. This, I realized was his true self... The Shadow!

1929: The Shadow pursues his crusade against crime, and Margo Lane struggles to fit into Lamont Cranston's mysterious world. Meanwhile, Big Gun Massaretti’s senseless gang war disrupts the mobs of New York, prompting a daring heist that draws the Master of Men like a moth to flame. And finally, an intrepid reporter relentlessly pursues The Shadow’s secrets, closing in.

Retrieved from "https://thelivingshadow.fandom.com/wiki/Shadow:_Year_One_Vol_1_5?oldid=14623"
Community content is available under CC-BY-SA unless otherwise noted.