The Shadow Wiki
Register
Don't have an account?
Sign In
Advertisement
in: Publications, 2013, April, Modern-Age,
and 15 more 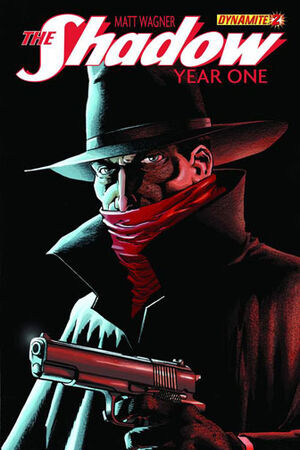 If the devil ever had a laugh... I'm sure he wants it back!

1929: After The Shadow saves Margo Lane from two thugs who try to throw her off the roof of the Cobalt Club, he has a cab take her back to her place, The Ambassador Hotel. Once in her room, she is informed by management that she needs to move out.

Outside the Cobalt Club, the police are investigating the two "jumpers" found dead near the building. Inspector Cardona realizes that the bodies have bullets in them and informs his officers to make a sweep of the area, especially the roof.

Meanwhile, "Big Gun" Massaretti begins a gangland war under the mesmerizing control of a mysterious presence.

Later, a reporter continues snooping about the Cranston estate, he then tails him back to the city, to the corner of 7th and 23rd. Near the construction site of the Empire State Building, Burke loses him as Cranston disappears in an alleyway. Inside one of the abandoned offices, Cranston dons his costume for the first time, ready to fight crime in an unsettling form.