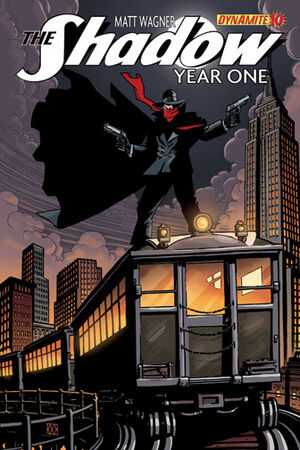 Previous Issue
Next Issue
The Shadow: Year One #9
—

1929: The Shadow finally faces off with his long-time nemesis, Dr. Zorn, a psychic villain whose powers and training rival those of the Night Master himself! Will Lamont Cranston's dark-cloaked alter-ego find the strength to defeat the vile and consumptive Zorn?  Will Margo Lane fall to the flying bullets and psychic traps of The Shadow's enemy? And will the reporter finally manage to unmask the mystery behind New York’s crusader for justice?

Retrieved from "https://thelivingshadow.fandom.com/wiki/Shadow:_Year_One_Vol_1_10?oldid=14625"
Community content is available under CC-BY-SA unless otherwise noted.