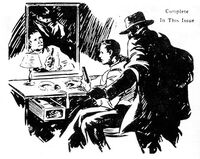 Single
Occupation
Insurance Broker
Origin
Origin
After being saved from financial ruin, he agreed to be a contact agent for The Shadow.
Creators

Rutledge Mann is a conservative investment broker who fell on hard times after the stock market crash of 1929.

Like agent Harry Vincent, Mann was also saved from suicide by The Shadow. He was offered a second chance at life, if he was willing to be The Shadow's new contact man. Mann agreed.

His duties are similar to The Shadow's first contact man, Claude Fellows, who was killed after witnessing a mob execution.[1]

Being a mild, rotund and unobtrusive person, Mann often spends his time frequenting the most exclusive places, such as the Cobalt Club. He is very good at observing everything that happens around him, while remaining unnoticed.

When he was first initiated into the The Shadow's organization, he continued Fellows' clipping bureau service -- gathering information from newspapers and briefing other agents on behalf of The Shadow. Later, when agent Burbank expanded his communications job, Mann was not needed as much for a contact. His duties changed and he became more of a financial adviser, often dispensing money to the agents and researching monetary matters as needed.

It should be noted that Mann is Lamont Cranston's financial adviser as well. However, Mann is not sure if Cranston is The Shadow. At times, Mann considers Cranston to be another agent, like himself.