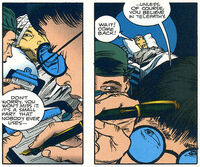 Doctor Roy Tam is a well respected professor of science.

When Duke Rollins and his gang tried to toss him off the Brooklyn Bridge, The Shadow came to his rescue. The Shadow then vowed to protect Dr. Tam from any retaliation from the gang. In return, Dr. Tam agreed to help the crime fighter if he was ever called upon to do so. That day did come when The Shadow learned that his archenemy, Shiwan Khan, was in America seeking to bomb New York City.[1]

After successfully saving the city, and thwarting Khan's schemes of conquest, The Shadow had his foe institutionalized at Dr. Roy Tam's medical facility. There, Dr. Tam performed an operation on the would-be world conquer which removed his frontal lobe -- relieving him of his telepathic powers.