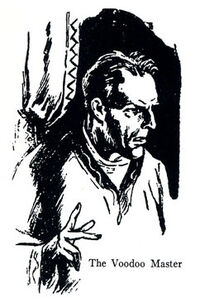 Dr. Rodil Mocquino, the so-called Voodoo Master, was an insidious foe of The Shadow.

He possessed a strange hypnotic power over men, which caused them do his bidding like zombies. Once under his spell, his victims were not truly the walking dead, but rather under his complete control -- mindless.

When Dr. Mocquino first came to New York, he formed a cult of faithful followers, worshipers of voodoo rites, through whom he sought wealth. The Shadow uncovered his headquarters, aboard an old ferry boat in the Hudson River. At first it was thought that Mocquino was killed by The Shadow's bullets, however, he was only wounded when he plunged beneath the surface of the water.

There were police boats all about, and other craft besides. One was a small tug manned by a handful of his reserves, under the command of his trusted lieutenant, Banzarro. They brought him aboard carrying him to safety, and recovery.[1]

The Voodoo Master enjoyed crime and relished opposition. Thus, his second attempt was a gigantic experiment upon the human race. To him, all people are alike, whether savage or civilized. In tropical countries, a master of voodoo - like himself - can gain a host of followers. He wanted to accomplished this in the United States, but there was one factor he wanted to eliminate, the influence of the machine age.

He chose the city of Hampstead to implant the principles of voodoo belief upon a community. He began destroying their factories and wreaking the city's industry. As the catastrophes continued, the townsfolk moved out with a distaste for enterprise. The Shadow took notice, and thwarted Mocquino's aspirations once again.[2]

Retrieved from "https://thelivingshadow.fandom.com/wiki/Rodil_Mocquino_(Street_%26_Smith)?oldid=15615"
Community content is available under CC-BY-SA unless otherwise noted.