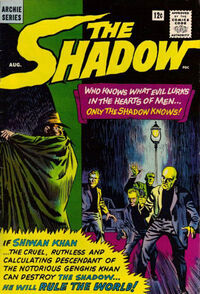 Robert Bernstein was a comic book writer who is best known for his stories in EC Comics and establishing the origin DC Comics, Aquaman. In 1964, Bernstein adapted The Shadow for Archie Comics. He wrote the first three issues of the series, which featured Lamont Cranston as a bespectacled international spy, while Margo Lane became his unsuspecting secretary.

Bernstein's last known work are the two stories in The Shadow #3 (Archie Series).

With issue four, Jerry Siegel, co-creator of Superman, took over the writing duties, where he created an even more campier version of The Shadow. Siegel inexplicably transformed him into a superhero, complete with a green and blue suit, cape, secret gadgets and hypnotic powers to brainwash his villains. Needless to say, the series was canceled a short time later.