The Shadow Wiki
Register
Don't have an account?
Sign In
Advertisement
in: Belmont Books Titles, 1963, September, Walter B. Gibson/Writer,
and 15 more

Return of The Shadow

The Shadow! A strange creature clad in black, with the power to cloud men's minds which he learned in the Orient, and a mocking laugh which is the avenger's chilling note of triumph, The Shadow is one of the most exciting suspense figures of all time.

Here is a brand-new full-length novel written by the creator of The Shadow, Walter B. Gibson. 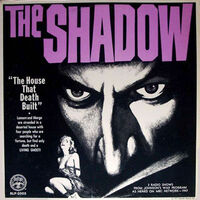 The paperback cover illustration was used for Biograph Records 1977 album, "The House That Death Built."

The cover illustration was also used in a March 11, 1966 Seagram Scotch ad.