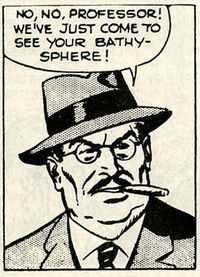 Ralph Weston is a middle-aged, wealthy and self-important man who is the commissioner of New York City's police department.

He is quite stubborn and firmly believes that The Shadow does not exists, however, in private he has acknowledged the crime fighter's existence to Lamont Cranston.

Weston is very much indebted to Cranston, as it was he who made the arrangements for the commissioner to join the Cobalt Club. With this friendship, The Shadow, as Cranston, is often called upon as a consultant on various cases that puzzle Weston. In turn this relationship benefits both parties, as The Shadow is able to receive privileged knowledge about a crime and Weston unwittingly seems capable of solving cases with surprising success.

When the government of Garauca selected Weston as their new Chief of National Police,[1] he was flattered enough to take up the offer and leave the United States for South America. In his place, he left ex-banker, Wainwright Barth as New York's new commissioner. When Weston finished putting the country of Garauca back in order, he resumed his commissioner duties.