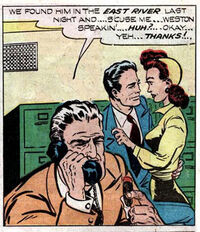 Ralph Weston is a wealthy, self-important, middle-aged man who is the commissioner of New York City's police department.

His attitude towards The Shadow has changed over the years. At first he blamed the elusive crime fighter for several of the crimes being committed, but he slowly built a kind of trust with the mysterious "voice." Especially sense on numerous occasions, The Shadow saved his life from revenge killings from escaped convicts.