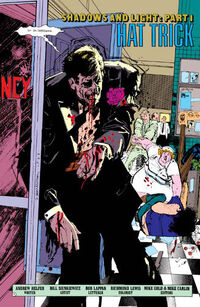 Preston Mayrock, Jr. was the cloned son of the real Lamont Cranston.

His father, who had cancer and used a wheelchair due to his weaken state, "breed" a younger version of himself, and then threaten The Shadow to take the three of them back to Shambala.[1] He hoped the advance medicines there would allow him to have a successful operation of having his brain transferred into his son's youthful body.

However, prior to luring The Shadow out of hiding and do his bidding, Mayrock Sr. (Cranston) ordered the assassination of all of The Shadow’s former agents, and succeeded in ruthlessly murdering Clyde Burke, Shrevvy and others.

The Shadow confronted Mayrock and avenged his fallen comrades by killing the elder Mayrock once and for all.

After his father's death, Mayrock, Jr. was later found stumbling in a hospital bloody, dying and whispering "the shadow."[2] Word of this went out to a few of The Shadow's agents and they believed it was actually him who was being cared for in the hospital.

When The Shadow heard of the situation, in haste, he had his agents kidnap Mayrock Jr. and place him in a fake ambulance, as he did not want "two" Cranston's roaming around. With a little help from Dr. Roy Tam's son, The Shadow was able to put the cloned Lamont Cranston on ice forever.