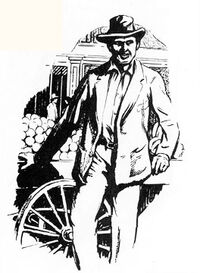 Pietro, the push-cart vendor was also a minor agent of The Shadow.

While manning his cart, he uncovered the existence of counterfeit nickels. He reported the scam to the police which led to a raid involving F.B.I. agent Vic Marquette. Later the crooks tried to kill him, but The Shadow intervened.

After the incident, Pietro was asked by Harry Vincent to join The Shadow's network of agents, as he was smart and had a keen eye for spying on events without suspicion.