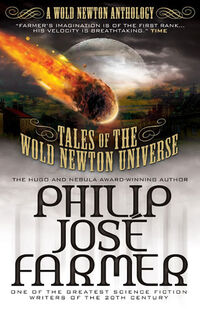 Philip Jose Farmer was a prolific and popular science fiction and fantasy author. Though he did not write any of the official Shadow pulp novels or scripts for the old-time radio show, he did introduce a fictional crossover concept, now known as the Wold Newton Universe, which unifies several pulp and literary figures genealogically under one family tree. In this universe, The Shadow is the brother of G-8 and the half-brother of The Spider.

Farmer was the first to chronicle the shared adventures of Doc Savage, Tarzan and Sherlock Holmes, who were aided by two aviator brothers.

To this day, various authors continue to adopt, and expand, Farmer's original idea of these heroic pulp characters populating the same universe. However, only stories featuring The Shadow should be listed on this wiki.