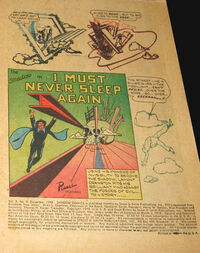 Peter Barry was a radio scriptwriter who wrote several episodes for The Shadow Radio Show during the 1940s. Some of his radio scripts were also adapted as comic book stories in The Shadow Comics.

His last script for The Shadow program aired on April 15, 1954, which was an updated story from an earlier episode of his.

A few months later, he wrote The Shadow TV pilot, "The Case of the Cotton Kimona." However, it failed from the beginning and was never aired, nor a TV-series ever followed.

During the 1950s and '60s, Barry continued to write for a variety of television shows, including "The Man from U.N.C.L.E." and "Combat!"