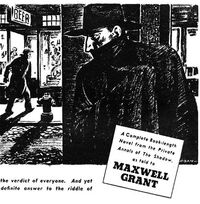 Paul Orban was a magazine artist, who's best known for his interior illustrations in several pulp related titles, such as The Avenger, Doc Savage, Thrilling Mystery and The Shadow Magazine.

His first published pen and ink drawings were in 1915, while he worked as a staff artist for The Chicago Sunday Tribune.

After WWI, he became a freelance illustrator to pulp magazines, and was very busy creating drawings for the Street & Smith publications, as well as hundreds of others for various detective and western pulps.

In the 1940s, he began creating interior artwork for Astounding Science Fiction (now known as Analog), which was also owned by Street & Smith at the time. He continued illustrating for the magazine throughout the 1960s.