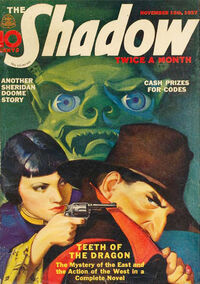 Myra Reldon was the first female agent to work for The Shadow (see also: Margo Lane).

Prior to becoming part of The Shadow's organization, she had spent many years in Asia learning the languages and the customs of the Chinese. This led her to become an undercover agent for the Department of Justice, where she disguised herself as "Ming Dwan" when investigating cases in Chinatown. She's really an American with fair complexion.

The Shadow came in contact with her while working on a case in San Francisco.[1] He was impressed with her talents and brought her into the fold of his agents when Vic Marquette, head of the Justice Department, ended Reldon's contract with the agency, though she is still on call when needed.