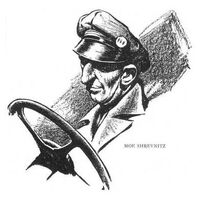 Moe "Shrevvy" Shrevnitz is a cab driver from the Bronx who once ran his own taxi service. When some thugs intended to kill him and take his taxicab, The Shadow saved him. He was later asked to join The Shadow's network of agents. He accepted, and became the "personal cab driver" for the organization.

His specialty is transportation. He is perhaps the shrewdest of the hackers who guided taxicabs through the tangled traffic of New York City. He is often discreetly shuttling The Shadow's agents around town, participating in several car chases and picking up suspects by any means possible. He's tough and resourceful, and he knows how to keep his mouth shut.