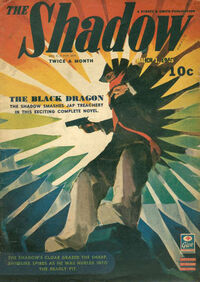 Modest Stein was a magazine cover artist from 1910 until the decline of the pulp publications in 1949. He's best known for his painted covers for several Street & Smith magazines, such as The Shadow Magazine.

Though Stein's first Shadow cover was its premier issue, that image was only a reworking of an earlier painting of his which was used for the 1919 publication, Thrill Book.

His impressionistic-styled covers for The Shadow began appearing in 1943. It was during his run that the magazine became digest size. Stein was able to provide a very surrealistic, and modern, look for the new smaller-sized magazine, which was indicative to the ones appearing on paperback books at the time. Most of his covers didn't even depict The Shadow on them.