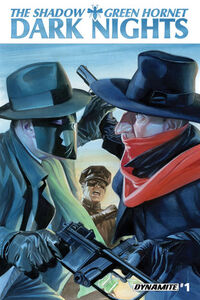 Michael Uslan has been the executive producer of the Batman movie franchise from Batman (1989) to The Dark Knight Rises (2012).

His very first professional comic book scripts were The Shadow #9 and #11 of the classic 1970's DC Comics run, launched by the legendary Denny O'Neil and Michael Kaluta.

The Shadow #11 marked the first meeting of The Shadow and fellow Street & Smith crime-fighter, The Avenger (along with Justice Inc.).

Currently, Uslan has the two pulp heroes teaming up again, along with Doc Savage, in his latest series from Dynamite Entertainment, Justice, Inc.