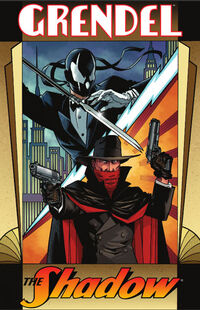 Matt Wagner is a comic book writer and artist. He is best known for being the creator of the characters Mage and Grendel. He has worked on a variety of established pulp characters, including a five-year stint as the writer for Vertigo title, Sandman Mystery Theatre.

He and his son, Brennan, worked together on Dynamite's The Shadow: Year One series, Matt on writing duties and his son providing the colors.

In 2014, he wrote and drew an all-new Grendel story steeped in the pulp-noir world of The Shadow! The three-issue series was co-released by Dark Horse and Dynamite Entertainment.

Retrieved from "https://thelivingshadow.fandom.com/wiki/Matt_Wagner?oldid=14244"
Community content is available under CC-BY-SA unless otherwise noted.