The Shadow Wiki
Register
Don't have an account?
Sign In
Advertisement
in: Publications, 2013, April, Modern-Age,
and 8 more 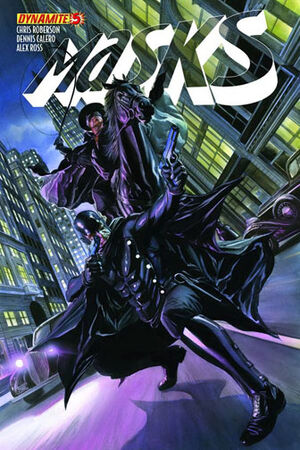 1938: The Justice Party tightens its grip on the Empire State, and the vigilantes and heroes are preparing to go on the offensive. The Shadow, Miss Fury, Green Hornet, Black Bat and the others have gathered enough evidence to prove that the public officials who have established the new fascist police state are merely the pawns of more sinister forces who lurk unseen. No one has heard from the Spider since he left for Albany to investigate the new governor, and he is feared dead, captured, or worse. And while Green Hornet, Black Terror, Miss Fury, and others join The Shadow in preparing to attack the hidden masters of the Justice Party, two fugitives take to the streets as Zorro and the Black Bat.