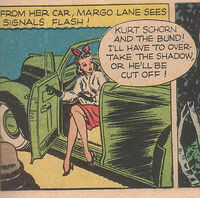 Margo Lane is the second female to be enlisted in The Shadow's crime fighting organization (see also: Myra Reldon).

Prior to joining The Shadow's network of agents, she met Lamont Cranston on a Caribbean cruise.[1] Two days later, she ran into him again at a New York night club. Or, so she thought. She actually mistook the disguised Kent Allard for Cranston and assumed that he was the same man who was on the boat.

Eventually, The Shadow asked her to become an agent of his. Their relationship quickly evolved and she suspected that he was was only using "Lamont Cranston" as a disguise. He finally did confess to her that her hunch was correct, he and the wealthy world-traveler were the same. What Lane doesn't know is that The Shadow's true identity is Kent Allard, however, she and Allard have met on one occasion.[2]

She usually mixes in with the high society crowd and becomes friendly with anyone involved with a crime which The Shadow is investigating.