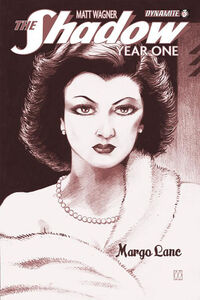 Margo Lane is a debutante from Boston who became the first female agent for The Shadow, after he saved her from two thugs who were trying to throw her off the roof of the Cobalt Club.

Though she came from a privilege background, her family would lose their fortune causing her to be a "poor little rich girl." Thus she became involved with the bootlegging mobster Guiseppe "Big Gun" Massaretti. When he ended their relationship, she approached him later faking a pregnancy. This infuriated him, which is why his two henchmen were about to toss her from the rooftop of the Cobalt Club where The Shadow intervened. Stopping the gang warfare which Massaretti instigated, was an early case The Shadow and Margo Lane worked on together. In fact, her first kill was shooting Massaretti, her ex-lover.

Equipment: None known.
Transportation: None known.
Weapons: The Devil's Whisper is a strange chemical compound that The Shadow gave to Ms. Lane in a special compact. When she rubs it on her thumb and finger, and then snaps, there is a flash of bright flame and a sharp explosion. [1]