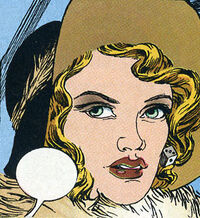 Margo Lane is a friend and companion to Lamont Cranston, and spies for his alter ego, The Shadow.

When The Shadow's foe, Shiwan Khan, came to America during one of his world conquest attempts, he kidnapped Margo Lane and her scientist father, Reinhardt Lane. Mr. Lane was involved in energy research and was creating a metal sphere to submerge in water. Khan hoped to use the device as a bomb, and thus, causing the destruction of New York. Needless to say, his plans were foiled by The Shadow.[1]