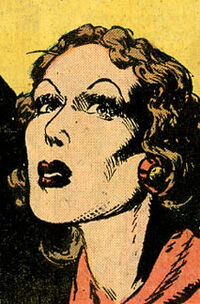 Margo Lane is one of several agents to be enlisted in The Shadow's crime fighting organization.

Prior to joining The Shadow's network of agents, she lived in Chicago and married a commodities broker named Richard Evans. When the "Black Thursday" crash occurred in 1929, Evans and his business partner were found guilty of embezzlement. Evans disappeared and was never found. His partner went to prison and Margo moved to New York, changing her last name to "Lane."

It was on the cruise ship to New York where she met Lamont Cranston. Or, so she thought. The man on the boat was actually a disguised Kent Allard, who rebuffed her advances when she thought he was the genuine high-society millionaire.[1]

By 1935, Evans' business partner was out of jail and tracked her down hoping to regain the money he believed she embezzled from him long ago. When the crook confronted her at gun point, he was promptly shot down by a mysterious figure from Margo's past -- her missing husband Richard Evans. Shocked that her husband was still alive, she listened to his story of guilt; how he took the money, double-crossed his partner and disappeared from her life. After his confession he left, never to be heard from again.[2]