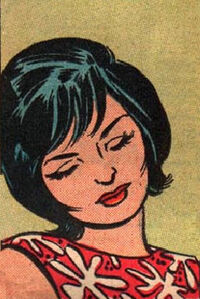 Margo Lane is the private secretary to the wealthy and successful, Lamont Cranston, and spies for his alter ego, The Shadow. A brief career in the theater, after leaving her native Denver, had given her the poise to maintain her dual life, as well as the acting ability to assume her many roles in aid of the black-garbed Avenger.